Using Robolectric with other build environments.

In earlier versions you must specify the constants field which points to the BuildConfig.class generated by Gradle. Robolectric uses the constants in the class to compute the output paths used by Gradle when building your project. Without these values, Robolectric will not be able to find your merged manifest, resources, or assets. This will cease to work in the future so we strongly recomend migrating to the new API.

Robolectric works with Android Studio 1.1.0 or newer. Simply follow the instructions above for working with Gradle. For versions of Android Studio older than 2.0.0, enable the unit test support in the “Build Variants” tab and run your test. As of Android Studio 2.0.0, the test artifacts feature is enabled by default, and the setting to enable/disable test artifacts can be found in File Menu -> Settings -> Build, Execution, Deployment -> Build Tools -> Gradle -> Experimental. 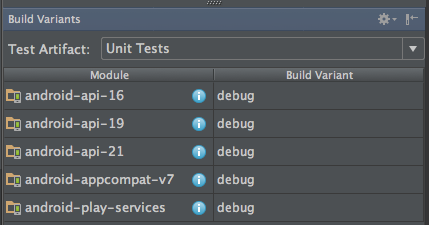 Note that if you already have existing JUnit configurations (Android JUnit in the root of the tree), you must do the same change as described above for all of them.

Add the following to your pom.xml:

Annotate your test with the base test runner:

If you use Maven to build your application, you will need to tell Robolectric where the unpacked resources are located for each library you use. This can either be specified in the @Config annotation:

or specified in the robolectric.properties file:

All paths are relative to the root directory of the project.

If you are not sure if resources are being loaded for a particular library, enable debug logging by setting the system property robolectric.logging.enabled = true and run your tests. You should see lots of output like:

If you don’t see a particular library in the list, double-check the configuration.

If you reference resources that are outside of your project (i.e. in an aar dependency), you will need to provide Robolectric with a pointer to the exploded aar in your build system. See the section titled “Using Library Resources” for more information.

Install the m2e-android plugin for Eclipse, and import the project as a Maven project. After importing into Eclipse, you have to mark the consume-aar goal as ignored, since AAR consumption is not yet supported by m2e-android. To do this, simply apply the Quick fix on the “Plugin execution not covered by lifecycle configuration” error. To run your tests, just right click on the project -> Run as -> JUnit Test, then choose the Eclipse JUnit Launcher.

My name is Umesh Singh and I was an...

A memorial tribute for Jonathan Gerrish

In late August, 2021, we were incredibly saddened to learn...